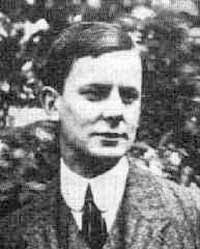 Gottfried Benn                                         Ernst Stradler                                           Ernest Toller
While there are numerous examples of poetry written by Germans during the First World War, very little of their work is available in English translations. Kurd Adler, Gottfried Benn, Gerrit Engleke, Franz Janowitz, Wilhelm Klemm, Alfred Lichtenstin, Ernst Stradler, August Stramm, and Ernest Toller are just a few of the names whose work has gained appreciation during and following the war. Several of these men wrote in a new style of writing, German Expressionism, which began in about 1909. The movement remained popular until about the mid-1920s.
The goal of expressionism was to represent feelings and moods, including psychological and spiritual reality, rather than just recording actual events. As a movement it extended into the world of drama and painting. The writing of August Stramm on the following page is a good example of expressionism.
Several of the German poets died as a result of the war. Kurd Adler is best remembered for his trench poems. He was killed in action in 1916 at the Western Front.   Gerrit Engleke was awarded the German Iron Cross in 1916. He died in a British field hospital in 1918. His poetry was not collected and published until 1960. Franz Janowitz was killed by machine gun fire in 1917, and Alfred Lichtenstein was wounded in 1914 at the Somme and died of his wounds. Ernst Stadler was killed in action at the Battle of Ypres. Gottfried Benn’s writing was influenced by his experiences as a medical supervisor, the death of his wife and a close friend, in addition to work in military wards during the war. One of his collections of poetry Fleisch (Flesh), published in 1917, speaks to the morbidity he experienced on a daily basis.
Of the list of poets above, Ernest Toller is probably the most known of the group outside Germany. Toller is most associated with writing plays. At the outbreak of the war he was studying at the University of Grenoble in France, but returned to Germany to enlist in the First Bavarian Foot Artillery Regiment. He was sent to the Western Front in 1915. In May 1916, he was sent to a hospital in Strasbourg diagnosed with exhaustion and nervous stress. He was later discharged as unfit for military service.  Over the next few years Toller was involved in anti-war campaigns and was arrested for treason and imprisoned. While in prison he wrote one of his most important plays, Transformation, a story of a front-line German Army soldier who becomes a pacifist due to his experiences in the trenches.
Toller experienced being arrested several times up until 1924 for his anti-government activities, and avoided the death penalty due to the intervention of two friends, Thomas Mann and Max Weber. During each of his stays in prison he continued to write poetry and plays. His memoir, I Was a German, was published in 1933, and emphasized the importance of humanity taking precedence over nationalism. Shortly after the publication of his autobiography Toller went into exile. In 1935, he moved to the United States and worked as a screen-writer for Metro-Goldwin-Mayer. In 1939, in a state of heavy depression, Toller hanged himself in New York.